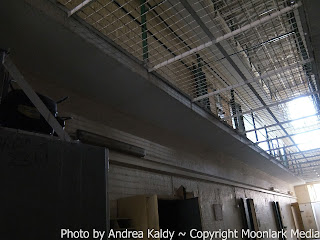 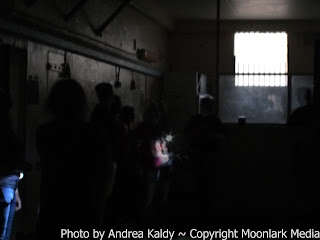 When you're in the paranormal field for as long as I have been, there is not much left that whets your paranormal appetite as much as a location you haven't investigated before. Gaols, psychiatric hospitals and other places of obvious trauma, staple locations for paranormal investigators, are in short supply nowadays so last night I grabbed the opportunity to get stuck into some work at Parramatta Gaol with my long time para gal pal, Beth Luscombe from Access Paranormal.
I started the night with taking some location shots with my Fujifilm XF1 but had to give up shortly as the originally fully charged battery expired only seven shots into my session. An inconvenience to say the least as I wanted to travel light on the night an didn't bring a spare batter or a charger even. Rookie mistake, one that I'm sure my partner in crime, Beth will not let me live down anytime soon.
We started off at the shower block, a sandstone building with the floor sunken into the ground about three feet deep. A small and largely featureless space with a tiled floor and walls with some of the shower roses still in place. This area had an interesting environment for audio with the natural echo the high ceiling and general interior sparseness created. The only features of this space were two benches and a laundry trolley. We decided it was as good an opportunity for an EVP session as any other.
While Beth reports that there were no EVPS captured, there were some interesting personal experiences during the session. I had several sensations of being touched, something I had given the spirits I was sensing permission for. One in particular, whom I sensed, paid special interest to my hair, playing with it before moving to the silver chain around my neck before I felt a hand around my neck tightening somewhat but never to the point of hurting me. It felt like a power play playing out that formed a  part of this man's personality while he was alive. He didn't speak or gave me any more information about himself at the time so we invited him to accompany us to the other structures on the ground of the gaol we were planning on visiting on the night.


We decided to try our luck in a building next that is largely ignored by people for some reason. We headed to the first floor with our torches and after exploring the level we settled on a cell where I heard a deep groaning sound from on our walk by.

The EVP has again revealed nothing conclusive but while in the cell I saw some mist forming evenly in the cell almost opposite the one we were in, across the concourse.

to watch the this file, visit my Facebook page

The footage and audio recording we took didn't yield anything paranormal at the time. It was as this time that the batter on my near brand new phone where I was recording the video with was getting close to depletion, even though I started the night with an almost full charge.
We headed over to another cell block where a séance just finished. Shortly after entering the building a large metallic clanking sound was heard that was repeated a short time later. The direction of the sound was obvious and we agreed that it was coming from above us. I took the opportunity to scan through the first and second floors to establish whether anyone else was there to make those sounds and tried to find the source of the audible phenomena. It wasn't until I reached the middle of the second floor concourse that I found a possible source, a metal sheet placed across the wire mash connecting the two side of the concourse. As soon as I walked on it, it made a familiar sound, a groan under my weight. I was the only one on that floor and on my way up I hadn't come across anyone there, aside from a man who was a part of the tour and who witnessed the sound with me from the ground floor to begin with. The sound has repeated a few times later on during the night with no one in the vicinity other than the investigators on the ground floor with me.
All in all it was a great night and a perfect way to paranormally start the year.