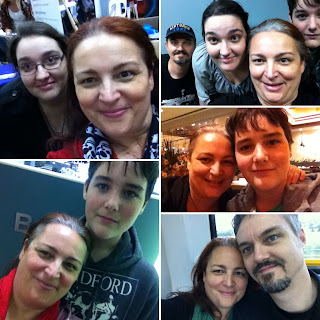 Children are a lot more open to the world of the unseen and if my own two (not so) little cherubs are anything to go by, there are plenty they experience. Because they have no framework at a young age to put the experiences in, they often get missed in the babble of talking about imaginary friends and storytelling games. Is there anything you can do to have those conversations with your child where they tell you about their unusual experiences? Of course there is.

1              Take your child seriously when they talk to you about their imaginary friends. Some of them may not be so imaginary. When our daughter spoke of seeing her grandmother in her bedroom a few days after she died, she was too young to understand the concept of death. She was perplexed by the fact that as far as she was concerned, her grandmother was living in a different country. Until one night she visited her granddaughter wearing her trademark polka dot blouse she loved so much. Michelle was adamant in the morning that she spoke with grandma in the night and the description she gave was a perfect likeness to what she looked like before she died.  The visit was a comfort not only to her but the rest of the family and we wouldn’t have known about it had we not taken the time and care to listen to her story.

2              Some spirits in your house or around your children may not come from your family tree. As it was the case with the house we live in. It's an old farmhouse and there are plenty of spirit shenanigans going on on a daily basis. As it turned out, the gentleman who built it was still around in his corporeal form after we have taken ownership of it and he took his cranky self to the kids room at night on occasion. Having not the heart to dispatch the old man from the house he built, we still wanted to take some steps to make the kids more comfortable sleeping in their own beds at night. We have put a sign on the door of their room that said loud and clear, "NO SPIRITS ARE ALLOWED!". That took care of that problem. They felt they have exerted their authority over their own room and who is allowed in and peace at night has returned once again. The old man was never felt or seen in that room again.

4              Sometimes siblings will have shared experiences. Depending on their age and the age gap in between them, they might express their experiences differently. It's important to be supportive and listen to what they have to say and give them a platform that promotes trust and a feeling of not being alone with their experiences. Kids are naturally mediumistic and some will grow up keeping their ability and growing it, however some will push it into the background only for it to come out later in life in a higher intensity but with much less control.

5              Introducing concepts such as angels and spirit guides is all and well. However I would very much caution against labelling any sort of spirit or other paranormal experiences as evil. Apart from causing unnecessary stress for children, as they have no understanding of what it is other than it's bad, it can cause severe anxiety that will last for years and other disorders.

6              If you're concerned and you feel that you need to discuss your child's experiences,  I suggest that you do that away from your child. Children are very perceptive and will pick up on your beliefs about their experiences. They will need you to be the one they look to for comfort and as a confidant that won't laugh at them. You might not be of the opinion that what they experiences was real but to them it was.

In any case, the most important to remember is that if you are concerned about the mental or physical wellbeing of your child, you need to see an appropriate health professional without delay.
Posted by Unknown at 2/02/2016 07:31:00 pm