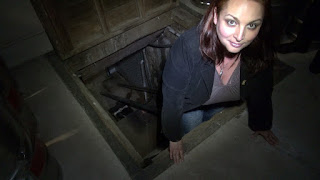 It usually creates grumbles in psychic circles when I say that you need some specialised skills to be efficient as a psychic/medium in the paranormal. I wouldn’t say it if it weren't for the years of experience I have working in the field. And by that I mean actual field. I am not someone who does one on one readings or stage mediumship, for good reasons that belong into a whole other blog article. From very early on in my run as a medium, I knew that those things weren't for me. I enjoyed the challenge of investigations too much, the questioning of the investigators, participating in experiments and even designing them. The more something or someone challenges me, the more I like it. I revel in seeing the paranormal field develop and grow year on year, something that really cannot be said for the spiritual field in general.

There are many distinct attributes that set aside a paranormal medium from stage mediums and those attributes will decide whether a medium will be efficient and effective in a paranormal investigation setting or not. I get asked a lot what those attributes are, how people can gain skills as mediums to be useful in the paranormal and what they need to do start working as a useful part of a team.
Here I am sharing some of my top tips regarding how you, as a psychic or medium can gain entry into the paranormal field and become an integral part of a team or even work as an independent medium investigator.

1              Just because you make claims that you're a psychic/medium it doesn't mean that anyone will employ your services as one.

You can write all the emails you want to teams out there. Chances are that if they even work with a medium they already have one. Someone who is tried and tested and with an established rapport with the other team members. Don't be disappointed if you get rejected. Many teams look for someone with some demonstrated experience in the paranormal field. The less training they have to give you on how an investigation works, the more time they can spend on investigating.

2              Make a name for yourself in the field.
The paranormal community, anywhere in the world pretty much, is a pretty tight knit community with teams knowing eachother, independent investigators consulting with teams and eachother so when a name pop ups that they don't know, there is a degree of avoidance. Trust is imperative whether you're a solo investigator or a team so the best way to get started is to get involved in the community. If you just insert yourself from nowhere in the community and demand attention, I can tell you, all you will get are cold shoulders. People work extremely hard to establish themselves in this fringe field and they will expect, rightfully so, that newcomers will pay their dues so to speak. Go to events where those people hang out, there are plenty of them and the offerings are growing every year, talk to them, find out what they do, ask them lots of questions and make it known that you're looking at entering the field yourself. Investigators are social people, well most of them anyway, and they will be happy to introduce you to even more people in the field.

The paranormal scene has changed a lot in the last 5 years or so and teams are increasingly critical of mediumship and emphasis is now on using electronic devices to gather evidence. A medium's word is no longer taken at face value. And that is how it should be. The more familiar you are with investigative procedures, experimentation and what goes on during an investigation in general, the more useful you are going to be in the field. Forget about TV shows as a benchmark for good investigative practices and look at the work of reputable researchers. The field is diverse and there are plenty of great brains out there publishing about paranormal research. Seek them out and be an informed psychic/medium.

Many a team has been brought down by an unscrupulous medium and their credibility lost due to shady conduct. It takes a long time to recover trust lost, not only with the clients but for the team as well. Same applies if you're a solo medium investigator. How you conduct yourself publicly, and that includes any sort of social media, will impact on your standing in the paranormal field as well as your ability to gain entry to a team.

This is a growing field and those who can't grow with it will be left behind. Growth happens when you are challenged, pushed to the very boundaries of your abilities and your beliefs. You have to have the strength to get up and keep going, the humility to say that you are wrong or don't know the answer to a question and the ability to recognise that you are not the centre of the universe at the investigation. A willingness to go anywhere you need to go and deal with whatever is at hand at a moment's notice is also a desirable skill that will stand you in good stead with investigators. I have climbed sand dunes and river banks in searing heat as well as spent nights in derelict buildings in the middle of the woods with no running water many a time to support an investigation. If you're not the type of person to do something like that, reconsider whether you really want to get into the field.

If after all the above you feel like you want to take the leap, I suggest you jump in with both feet or not at all. This field requires a high level of personal commitment and the diversity means that you never know what you'll get when you go out investigating so you'll have to think on your feet. If you like being challenged and to push yourself then don't hesitate. The rewards are well worth it!
Posted by Unknown at 2/09/2016 08:35:00 pm